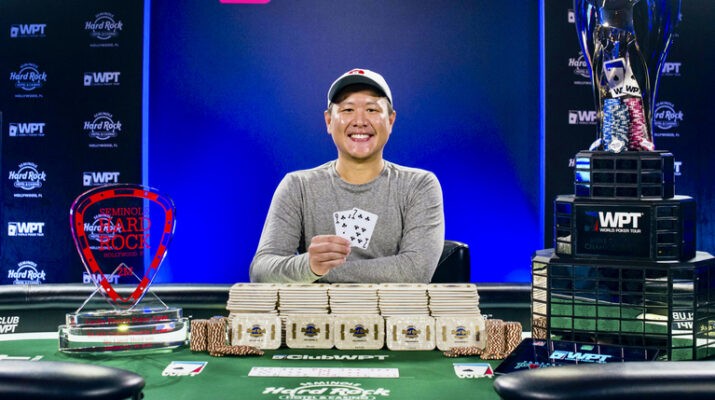 The 2022 World Poker Tour Lucky Hearts Poker Open $3,500 buy-in no-limit hold’em main event attracted a massive field of 1,982 entries, the second-largest turnout in WPT main tour history. The huge turnout resulted in the $2 million guarantee being blown away, with the final prize pool surpassing $6.3 million. Six days after cards got in the air, the largest chunk of that prize money was awarded to eventual champion Alexander Yen. The 35-year-old Indiana native earned $975,240 and his first WPT main event title for coming out on top.

In fact, this was his first major live tournament title. Yen had made it down to heads-up in two Mid-States Poker Tour events back in 2014 and 2015, but ended up coming away as the runner-up on both occasions.

“It feels absolutely incredible,” said Yen in an interview with Seminole Hard Rock poker blog reporters. “I’ve never won a live tournament before. I don’t even think I’ve won online, so this is a pretty unreal feeling.”

“My friends make fun of me all the time, saying you must have chopped it with your opponent both times cause I played so bad,” Yen told WPT reporters about finally emerging victorious in a heads-up battle in a major event. “I had that monkey on my back and had to get it off, really prove myself.”

In addition to the title and the money, Yen also secured 1,620 Card Player Player of the Year points as the champion, the single largest amount of points awarded in any event yet in 2022. This win was his first POY-qualified score of the year, but it alone was enough to catapult him into first place in the overall standings.

Yen entered the final day as the chip leader with six players remaining. On the 27th hand of the day, short stack Omar Lakhdari got all-in with K-Q suited racing against the pocket nines of two-time World Series of Poker bracelet winner Daniel Lazrus. The flop gave Lazrustop set and Lakhdari a flush draw. The straight made things even more interesting, as Lakhdari picked up outs to a gutshot as well. The river was of no help, though, and Lakhdari was knocked out in sixth place ($208,025).

Josh Kay lost two all-ins against shorter stacks to fall to the bottom of the leaderboard during five-handed action. He ended up calling an all-in from Anton Wigg with AClub SuitJClub Suit. Wigg flopped trips with KDiamond SuitQHeart Suit and avoided Kay’s backdoor flush possibilities to secure the pot and narrow the field to four. Kay took home $272,830 as the fifth-place finisher.

Just a few hands later another big showdown took place. Nicholas Verderamo three-bet shoved over the top of Yen’s open raise with A-8. yen called with pocket queens and held through a jack-high runout. Verderamo earned $361,130 and 810 POY points for his fourth final-table finish of 2022. The career-best score propelled him into second place in the POY rankings.

Daniel Lazrus was the clear short stack entering three-handed play. Despite earning two double-ups through Yen, he was ultimately eliminated when his pocket sixes were unable to outrun Yen’s K-J offsuit. A jack on the flop gave Yen the lead, which he maintained through the turn and river. Lazrus was awarded $482,380 for his third-place showing. This was the second-largest payday of his career, behind only the $1,000,000 he earned for taking down his second career WSOP bracelet as the winner 2021 ‘Millionaire Maker’ event.

Heads-up play began with Yen holding 57.7 million to Anton Wigg’s 22.6 million. The accomplished Swedish poker pro had more than $3.2 million in prior earnings, including a win in the 2010 European Poker Tour Cophenhagen main event for $670,713. Wigg was looking for his first title on the WPT, and got off to a strong start. After sliding a bit initially, he earned a crucial double up to pull within 20 big blinds of Yen. He then battled his way into the chip lead briefly.

Yen was soon able to right the ship, though, taking down a hfty pot with jacks up to re-establish a healthy lead. In the final hand of the event, Yen limped in from the button with 9Club Suit7Club Suit and Wigg raised to 2,000,000 with QDiamond SuitQClub Suit. Yen called and the 10Diamond Suit8Club Suit6Club Suit flop gave him a straight with a straight-flush redraw. Wigg bet 4,500,000 as the first to act and Yen called. The 6Diamond Suit on the turn paired the board. Wigg went into the tank before announcing that he was all-in. Yen made the quick call and avoided a queen or six on the river. The 4Diamond Suit on the end officially locked up the pot and the title for Yen and sent Wigg home with $650,180 for his runner-up showing. The 1,350 POY points he secured moved him into third place on the leaderboard.

Here is a look at the payouts and POY points awarded to the final six: 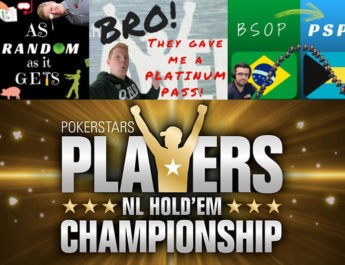 Platinum Pass Adventure: PokerStars’ finest are sending you to the PSPC