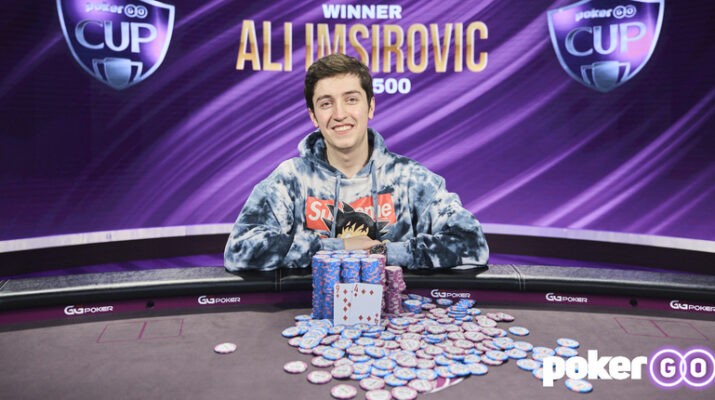 Ali Imsirovic set the record for the most poker tournament titles won in a calendar year in 2021. His unprecedented title streak, which saw him secure the Card Player Player of the Year award and many other annual points races, began with a pair of wins in late February of last year. His incredible form has seemed to carry over into the new year, as the 27-year-old poker pro has already secured two high roller titles in the early weeks of 2022, bringing his total to 16 titles in a 12-month span. His latest victory saw him defeat a field of 43 entries to win event no. 7 at the 2022 PokerGO Cup. He took home $365,000 as the champion of the $25,000 buy-in tournament, bringing his career earnings to more than $16.6 million.

In addition to the title and the money, Imsirovic was also awarded a bevy of rankings points for this latest win. This was his fifth qualifying score for the 2022 Card Player of the year race. The 420 points he secured were enough to move him into eighth place in the overall standings. He also locked up 219 PokerGO Tour points, bringing his total to 651 so far this year. He remains in second place on the PGT leaderboard as he looks to go back-to-back as the winner of that points race.

The final day began with Imsirovic in the lead and just six players remaining, with Roger Sippl finishing seventh for $43,000 to bring day 1 action to a close the previous evening. He extended his advantage by winning a preflop coinflip with K-Q suited besting the pocket eights of four-time World Poker Tour main event winner Darren Elias (6th – $64,500).

Cary Katz was the next to fall when his short-stacked shove with K-10 suited resulted in him being at risk against the A-K suited of a surging Imsirovic. Katz failed to come from behind and was knocked out in fifth place, securing $86,000 for his latest deep run in a high-stakes event. His career earnings now sit just shy of $34 million, which puts him in 10th place on poker’s all-time money list.

A battle of the blinds brought about the elimination of three-time bracelet winner and WPT main tour champion Nick Schulman. His fellow three-time bracelet winner Jeremy Ausmus shoved from the small blind for just shy of 10 big blinds effective. Schulman called all-in with A-5 and was leading Ausmus’ Q-9 suited. Schulman maintained the lead through the turn, but a queen on the river sent the chips Ausmus’ way. Schulman was awarded $118,250 for his third cash of the series.

Despite scoring that knockout, Ausmus was ultimately the next to hit the rail. Imsirovic opened with a shove from the button and Ausmus called all-in for just over 12 big blinds with AClub SuitKHeart Suit. Imsirovic’s ADiamond Suit7Club Suit was dominated, and in even worse shape than normal given that Sam Soverel folded AHeart Suit7Spade Suit from the big blind. Despite that, Imsirovic was able to find one of the two remaining sevens on the flop to take the lead. He was able to maintain that advantage through the river, sending Ausmus home with $161,250 for his sixth final-table finish of 2022. The 280 POY points he earned were enough to move him into first place in the POY standings. He also secured 97 points towards both the PGT and PokerGO Cup races. He sits in third in the former and leads the latter with one event yet to play.

With that Imsirovic took a sizable lead into heads-up play with Soverel, a bracelet winner and 2019 winner of the Poker Masters Purple Jacket. Soverel battled all the way back to take the lead briefly, just in time to play the key hand of the day. Soverel raised from the button with ASpade SuitQDiamond Suit and Imsirovic defended his big blind with KHeart Suit2Diamond Suit. The flop came out 6Diamond Suit2Spade Suit2Club Suit and Imsirovic checked with his trip deuces. Soverel bet 75,000 and Imsirovic check-raised to 350,000. Soverel made the call with his ace high and the turn brought the ADiamond Suit. Imsirovic bet 700,000 and Soverel called with his aces and deuces with a queen kicker. The 10Club Suit on the river saw Imsirovic move all-in for 1,870,000. Soverel went into the tank for a bit but ultimately made the call to be left with just a few big blinds. 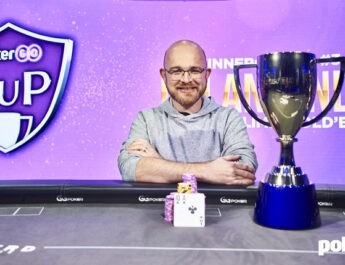