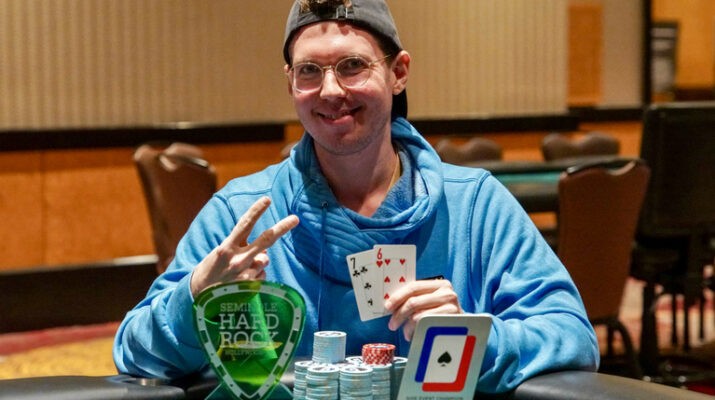 The 2022 World Poker Tour Seminole Hard Rock Poker Showdown series is currently in full swing in Florida. The latest big event to wrap up was the $50,000 buy-in no-limit hold’em high roller, which drew 39 entries to create a prize pool of nearly $1.9 million. After two long days of high-stakes tournament action, Andrew Lichtenberger emerged victorious with the title and the top prize of $638,223.

The 34-year-old World Series of Poker bracelet winner survived a protracted heads-up battle with Alex Foxen to secure his first title of the year and the 14th of his live tournament career. He now has more than $13.1 million in total earnings to his name.

“I won every all in,” Lichtenberger told the SHR Poker Blog when asked about heads-up play. “I lost the vast majority of the big pots we played that were not all in. Most of them went to the turn or river, and I just kept having bottom of range. It was kind of absurd. But here we are. I won the pots that mattered.”

In addition to the title and the money, Lichtenberger also earned plenty of rankings points as the champion of this event. The 408 Card Player Player of the Year points he secured for the win were enough to move him into 110th place in the 2022 POY race, which is sponsored by Global Poker. While this was his first title, he now has three final-table finishes under his belt this year. Lichtenberger was also awarded 383 PokerGO Tour points, enough to see him climb to 21st on that leaderboard.

The top six finishers cashed in this event. Brock Wilson was the last player eliminated outside of the money, with his pocket kings losing to the A-J of Lichtenberger to burst the bubble. Steven Veneziano (6th – $113,490) was the next to hit the rail, with his A-Q losing a classic preflop race to the pocket sevens of Andjelko Andrejevic.

Five-time bracelet winner Jason Mercier earned his first live tournament cash since late 2019 with a fifth-place showing in this event. His run came to an end when he shoved K-J suited and received a call from Foxen, who held A-K. Mercier took the lead on the flop with a pair of jacks, but Foxen rivered a flush to take down the pot and narrow the field to four. Mercier earned $141,865, increasing his career total to more than $19.7 million.

Andrejevic got all-in with a pair of kings facing both a pair of aces and the nut flush draw for Kirk Steele. Andrejevic found no help on the river and was knocked out in fourth place, earning $198,610 for his strong showing in this event. The WPT champion from Serbia now has nearly $4.5 million in lifetime cashes.

Despite scoring that knockout, Steele was ultimately the next to fall. He shoved from the small blind with pocket eights and received a call from Lichtenberger in the big blind with A-9 suited. Lichtenberger flopped an ace, then improved to the nut flush on the river. Steele was sent home with $283,725 as the third-place finisher, by far the largest live tournament score of his career.

With that, Lichtenberger took nearly a 3:1 chip lead into heads-up play with Foxen. As previously mentioned, the two went on to battle it out for several hours. There were plenty of swings during the reportedly four-hour showdown, with both players holding healthy leads at some point during the clash for the title. By the time the final hand arose, Lichtenberger had pulled well ahead. With blinds of 50,000-75,000 and a 75,000 big blind ante, Foxen limped in holding JHeart SuitJClub Suit on a 975,000 stack. Lichtenberger moved all-in from the big blind with 7Club Suit6Heart Suit and Foxen called with his big pocket pair. The board came down QSpade Suit10Diamond Suit5Spade Suit4Spade Suit3Club Suit and Lichtenberger made a running straight to secure the pot and the title.

Foxen earned $515,587 as the runner-up. This was his 11th final-table finish of the year, with two titles won and more than $1.6 million in POY earnings accrued along the way. As a result of his impressive results so far in 2022, Foxen now sits in fifth place in the overall POY standings, and third in the PGT points race. 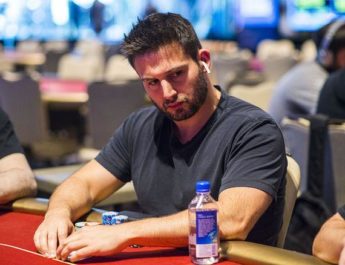