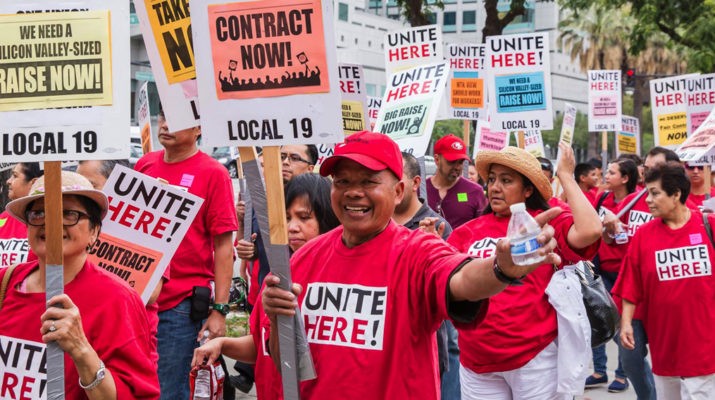 The agreement could help the union return at the former Trump Taj Mahal casino resort, which Hard Rock is currently converting into what would be Hard Rock Hotel & Casino Atlantic City. The property is scheduled to be reopened in June.

Under the agreement between Local 54 and Hard Rock, the operator should agree as an employer to recognize the labor union as the official “bargaining agent of the employees” if a third party confirms that the greater number of employees have signed UNITE HERE Local 54 membership cards.

Hard Rock Hotel & Casino Atlantic City is currently taking shape at the site of Trump Taj Mahal, once owned by US President Donald Trump. The lavish casino resort closed doors in the fall of 2016 amid a workers’ strike involving Local 54 members. They picketed the property for over a month, asking to have their previous health insurance and pension packages restored. In the early 2010s, workers gave up on certain benefits to save the ailing Trump Taj Mahal from bankruptcy.

The property was owned by New York businessman Carl Icahn back in 2016 when it was shuttered. Mr. Icahn blamed the closure of the hotel and casino complex namely on the strike, arguing that it had hurt Trump Taj Mahal’s profitability beyond repair.

The closure of Trump Taj Mahal left 3,000 people unemployed, including 1,000 Local 54 members. The property was purchased by Hard Rock International in the spring of 2017 for a reported price of $50 million. The Florida-headquartered casino operator pledged a $500-million investment into the India-themed resort, promising to convert it into a typical Hard Rock property, replacing its iconic minarets with rock’n’roll features.

The redevelopment project is expected generate over 1,000 jobs during construction and more than 3,000 jobs once fully operational.

Under the “card count neutrality agreement” Unite 54 local members, who were previously employed at Trump Taj Mahal, could return to the redesigned property.

Under the neutrality clauses of the agreement between the labor union and Hard Rock, the latter has agreed not to prevent its staff members from joining Local 54, if they wish, and the Union and its members have agreed not to disrupt their workplace through strikes and similar initiatives.

In comments to the Press of Atlantic City, both parties have said that they were content with the agreement. Bob McDevitt, President of Local 54, praised the Hard Rock management, saying that the company seemed to understand how Atlantic City’s market worked. Hard Rock officials, in turn, pointed out that their work with the labor union would help them enter Atlantic City successfully.