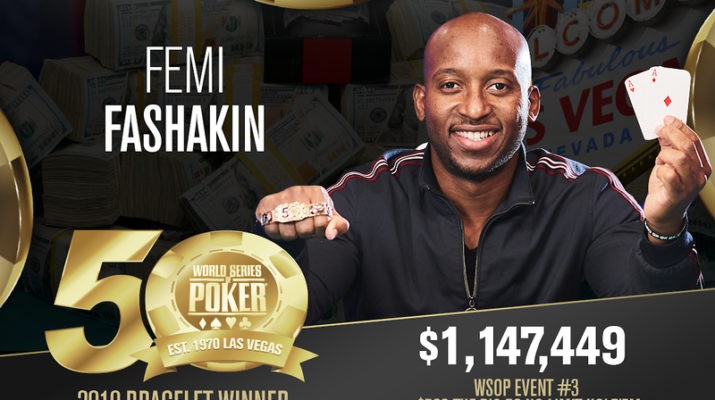 Femi Fashakin won the biggest tournament in poker history Friday night at the Rio, earning his first World Series of Poker bracelet in the process.

Before Friday’s victory, Fashakin’s career tournament earnings were just $59,706 and his largest score was $11,250. Most of his cashes came from small stakes events in South Florida with results dating back to the start of 2015. It was his first-ever final table.

“I stared playing at local bars,” Fashakin said to WSOP reporters after his win. “Hold’em and all that. I played that about six months to one year. And I thought I had graduated. So, I started playing at the Hard Rock in Tampa and I had a few cashes. Then I started to go to South Florida and played some $360s and then some $570s.”

Despite only modest results, Fashakin came into the final table with plenty of confidence.

“I always felt I could play poker,” he said. “I had room for improvement, but I had some skills.”

Besides a life-changing seven-figure score and a WSOP bracelet, Fashakin picks up 720 Card Player Player of the Year points. This was his first final table and first title, putting him in 321st place in the 2019 POY race, sponsored by Global Poker.

The fifth and final day of this marathon event that featured four starting flights and four separate Day 2s before the field combined on Day 3 started with just seven players and Fashakin leading the way. The final table was reached near the end of Day 4 with David Rasmussen and Morten Christensen hitting the rail in ninth and eighth place, respectively.

Despite holding the chip lead, Fashakin only started Day 5 with 39 big blinds. With shallow stacks, there were plenty of all ins early and after a couple of orbits, and double ups, Adrian Curry busted in seventh when he ran pocket 10s into Rafi Elharar’s pocket kings.

Eight hands later, Daniel Ghobrial hit the rail in sixth when he shoved all in for his last three big blinds and was called by Elharar and Nick Chow. Chow turned trip fives with Q-5 and Ghobrial’s A-3 was drawing dead to the river.

Five-handed play lasted for nearly 40 hands before the next elimination took place. Chow raised from the cutoff and Walter Atwood moved all in out of the big blind. Atwood’s K-10 needed help against Chow’s A-7 and couldn’t get it. Atwood picked up $308,701 for his fifth-place finish.

When four-handed play began, Fashakin had dropped to the bottom of the chip counts and had less than 10 big blinds. Fashakin doubled with A-7 against Cullen’s A-5 and he started his ascent back up the leaderboard.

In another 20 hands of play, most of which without a showdown, Fashakin moved back into the lead for good.

Fashakin eliminated Chow in fourth with Q-10 against Chow’s A-4 and sent Elharar to the rail just a couple hands later. He started heads-up play against Cullen with nearly a 3:1 lead and became the first-ever player to cross the billion, yes billion, chip mark just four hands into heads-up play.

Fashakin picked up pocket aces a few hands later and got it all in preflop against Cullen’s Q-J. Fashakin’s hand held up and the best hand in poker finished off the biggest field in the history of the game.

For more coverage from the summer series, check out the 2019 WSOP landing page, complete with a full schedule, results, news, player interviews, and event recaps. 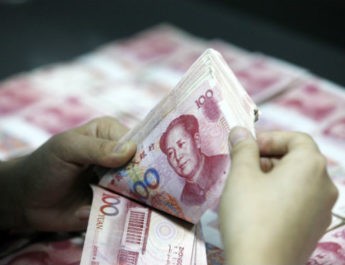 China To Prohibit Overseas Investments In The Gambling Industry