Before 2018, the record for most final-table finishes in a calendar year was 23, set by Bryn Kenney in 2017. Jake Schindler blew that number away last year by eight, making an astounding 31 final tables during the 12-month stretch. To put that in perspective, the 29-year-old poker pro averaged one final-table finish every 12 days this year.

As a result of his unprecedented consistency, it’s not a surprise that Schindler has earned the 2018 Card Player Player of the Year award, which is sponsored by Global Poker.

Of course, it wasn’t just the record Schindler earned. He also won quite a bit of money, cashing for $8,731,019 in POY-qualified scores and winning six titles along the way.

Schindler notched two of the three largest paydays of his career in 2018, both of which were seven-figure scores. The Bryn Mawr, Pennsylvania-native currently sits in 14th place on poker’s all-time money list with career live tournament earnings of more than $23.5 million.

Schindler was incredibly successful at the highest stakes in live tournaments, consistently making deep runs and winning titles in the elite, small-field events with buy-ins of $25,000 or higher. But it was his success in several smaller buy-in events with much larger fields that helped him accumulate enough points to surpass some of his fellow high rollers and secure the POY award this year. Schindler had two final-table finishes in fields with 500 or more players at the $5,000 buy-in price point that accounted for just shy of a quarter of his total points for the year.

While this is Schindler’s first Player of the Year title, he has frequently been a top POY contender in recent years. He finished eighth in the POY race in 2014, fifth in 2016 and 15th in 2017.

Despite setting the record for final tables this year, Schindler’s 2018 campaign actually got off to a somewhat delayed start; his first recorded cash didn’t come until early February. He made up for lost time by making four final tables that month, all at the inaugural running of the U.S. Poker Open.

Schindler notched a ninth place, fourth place and two second-place finishes in four different no-limit hold’em events at that series, with buy-in ranging from $10,500 up to $52,000. He cashed for a total of $693,400 and 880 Player of the Year points in the span of nine days.

He closed out his monster spring with five final-table finishes in May, all taking place at Aria. The 2018 World Poker Tour Tournament of Champions Festival played host to a number of high roller events. Schindler won a $10,000 no-limit hold’em side event to kick off the series, and then finished fourth, third and second in three separate $25,000 high rollers. The WPT Elite Poker Championship had begun earlier in the month, but saw the final table of the $25,000 high roller play out at the end of the month at the Esports Arena at Luxor. Schindler placed fifth in that event, bringing his total haul for the month to $650,000 and 1,003 points.

June was another solid month for Schindler, as he added another four final tables to his 2018 resume. He had two scores at the Aria Summer High Roller Series, finishing second in a $25,000 high roller and seventh in a $10,000 pot-limit Omaha event. He also made two final tables in $5,000 buy-in no-limit hold’em with big-blind ante events, one taking place at the World Series of Poker and another at the Venetian DeepStack Championship Poker Series. The month saw him add 1,177 points and $422,467 to his yearly totals.

Schindler added four more final-table finishes in July, including the score that earned him the largest amount of POY points for the year. Schindler made two more final tables at the Aria Summer High Roller Series, adding another $202,800 and 370 points with second and third-place showings in $25,000 and $10,000 buy-in events. Schindler also made his second WSOP final table of the year, placing eighth in the $50,000 buy-in no-limit hold’em big-blind ante event for $173,604 and 187 points. He closed out the month by finishing second in the $5,000 buy-in World Poker Tour Gardens Poker Festival main event for $366,740 and 1,400 points, the biggest chunk of points Schindler received in a single event in 2018. The tournament had drawn an impressive field of 584 entrants for its inaugural running.

August saw Schindler make only one final table, but he made it count. Schindler defeated a field of 123 entries in the Seminole Hard Rock Poker Open $2 million guaranteed $25,500 buy-in no-limit hold’em high roller event to earn $800,758, 924 points and his fifth POY-qualified title of the year.

The 2018 Poker Masters series at Aria Resort Casino in Las Vegas featured seven events spread over the course of eight days in September. Schindler cashed in three of those events, earning $575,000 and 787 total points. He had a fourth and a third-place finish in two $25,000 high roller events, and another fourth-place showing in a $50,000 buy-in event at the series. His September run was enough to see him climb into the outright lead in the POY standings as the race moved into the final quarter of the year.

In December, Schindler made two final tables in high roller events at the Bellagio’s Five Diamond World Poker Classic series. He placed third in a $25,000 buy-in for $168,000 and 280 points. Schindler closed out his year strong by winning the $100,000 buy-in event, outlasting 37 entries to win $1,332,000 and 480 points. This was his second seven-figure score of the year, and it brought his POY-qualified earnings for the year to more than $8.7 million.

By setting a record for final-table finishes in a year Schindler proved that he was live poker’s most consistent tournament player, and therefore truly was the Player of the Year for 2018. 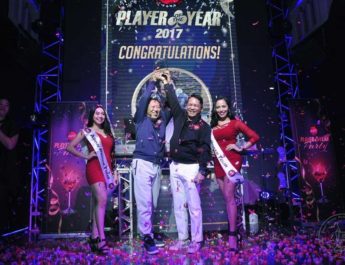