A high-stakes gambler indicted last month by the U.S. government for wire fraud has pleaded not guilty and is set to go to trial in federal court in California in May, but he’s also facing legal trouble in Las Vegas and it involves two members of the Poker Hall of Fame.

According to court documents obtained by Card Player, a poker player by the name of Seyed Reza Ali Fazeli, who the feds say orchestrated a roughly 18-month-long sports ticket scheme to fund high roller poker buy-ins at the Aria casino in 2016, scammed poker legends Erik Seidel and John Juanda, as well as poker pro Zachary Clark.

Per the complaint filed in Clark County District Court, Seidel, Juanda and Clark handed over a combined $1.3 million to Fazeli and his company, Summit Entertainment Group, so that Fazeli could purchase tickets to the 2017 NFL Super Bowl and resell them at a substantial profit. The plan was to share the profits 50-50. Fazeli’s alleged ticket scheme utilized the website onlinetickets.com. The lawsuit called his business a Ponzi scheme.

According to the complaint, Fazeli said he was going to use $10 million to purchase about 2,800 tickets to the 2017 Super Bowl. The lawsuit says that Fazeli received payment from the poker pros just weeks prior to the big game, and thereafter he provided them with promissory notes. Seidel and Clark gave Fazeli $500,000 each, while Juanda invested $300,000, according to the lawsuit filed late last year. The world-class poker pros were supposed to receive their investments back plus the profits about a month after Super Bowl LI, but Fazeli never honored the promissory notes, the lawsuit says.

He never bought the tickets, and instead used the money to fund his gambling expenses and pay off other debts, according to the federal government’s criminal indictment. The full extent of his gambling habit isn’t clear, but authorities say some of the money went to entering the high-stakes poker tournaments at Aria.

Fazeli cashed in 10 tournaments in 2016 with a buy-in of at least $25,000. All of them were at Aria. Nearly all of his $2.2 million in lifetime tournament earnings came in 2016. He didn’t cash in a single high-stakes tournament last year. His alleged ticket scam began to unravel in May 2017, according to federal prosecutors.

Ironically, as the pressure on Fazeli was mounting, he told Seidel, Juanda and Clark in June 2017 that he was going to “win back their money playing poker,” the suit says.

The poker pros weren’t the only ones to fall victim to the alleged scam. There are at least four other lawsuits against Fazeli and Summit Entertainment.

o make matters even worse for Fazeli, Aria is also suing him for unpaid casino markers, according to a separate lawsuit obtained by Card Player. Despite cashing for all that money in the poker tournaments, Fazeli was extended $2.1 million worth of casino credit between December 2016 and January 2017. The casino extended him credit 34 separate times, according to the lawsuit. The smallest marker was worth $25,000, which was the amount for a buy-in to the high roller poker tournaments.

Fazeli returned $1 million of the casino credit, which leaves him still on the hook for $1.1 million, according to the lawsuit. Aria says that Fazeli has “failed and refused” to pay up. The Bellagio, a sister property to Aria, is also a party in the lawsuit. That casino claims Fazeli owes it $500,000 from markers that it issued to him in January 2017.

Fazeli could face up to 40 years in prison if convicted of the federal criminal charges. 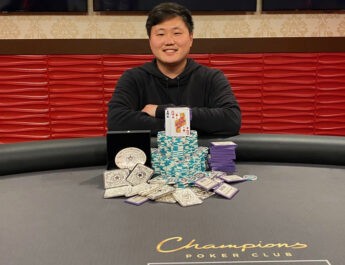