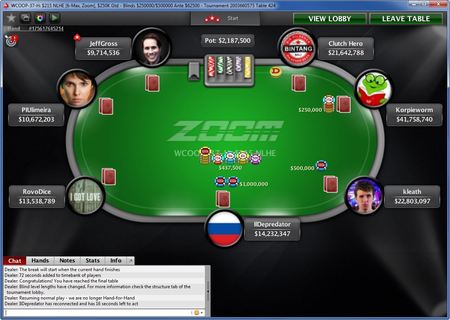 With a Team PokerStars Pro at the table streaming the show to the internet, more eyes than usual were on the final table of Event #37-H. That audience got a show worth watching, too. Even with half the players short-stacked and the blinds and antes through the roof, it took an hour to knock out the first player. Finally, after enough twists and turns to fill up a mystery plot, Uruguay’s IlDepredator emerged from the chaos with a first career COOP title.

Event #37-H was a rare breed: the one-day WCOOP tourament. Played as 6-max Zoom Poker until there were just 18 players remaining, it took a little under eight hours after the first hands were dealt to trim the field down to seven players. This time the lineup included none other than Team PokerStars Pro Jeff “JeffGross” Gross, who survived the bubble on the short stack to stream the final table out live onto his Twitch channel.

Other than 2017 SCOOP-Medium champ and Spin & Go millionaire Korpieworm, nobody was particularly deep as things got started with blinds and antes at 250,000/500,000/62,500. But all the short stacks seemed to find a way to win over the first hour of play. Serial Stars finalist Gustavo “PIUlimeira” Ferreira doubled through past Sunday Million, SCOOP, and WCOOP finalist Romans “RovoDice” Voitovs with A♦ A♥. RovoDice’s K♥ T♥ rivered a king to top Akira “Clutch Hero” Ohyama’s A♦ J♥. Jeff Gross’s K♦ J♦ did the same to top PIUlimeira’s 7♣ 7♥, prompting a celebratory run around his room.

Gross really got excited when his K♦ K♥ held up against IlDepredator’s Q♥ Q♠, but that just made for a harder fall two hands later when he called with K♣ K♥ after Clutch Hero open-shoved under the gun for 5.8 million with T♥ 8♣ and spiked a straight on the river of the 7♠6♦ 4♣ K♦ 9♠ board. That took the table to the 12:55 a.m. ET break with no knockouts.

After all that action but no movement on the pay scale – and no agreement to look at a potential deal – the first three eliminations came along within a five-hand span following the break. Clutch Hero went first after re-raising all-in for 16 million chips with Q♥ 8♦ over the top of IlDepredator’s middle-position min-raise. IlDepredator called with J♦ J♠ and made jacks full of fives, sending Clutch Hero to the rail in seventh.

Then Jeff Gross picked up A♦ 5♦ on the button on the very next hand. He moved in for 8.2 million chips over the top of IlDepredator’s second consecutive opening min-raise. IlDepredator called with K♣ 9♥, which went from 38.1-percent underdog to kings-full-of nines winner on the 9♣ T♠ 5♠ K♠ K♦ to halt the Team Pro’s progress in sixth.

Romans “RovoDice” Voitovs and Gustavo “PIUlimeira” Ferreira were separated by less than a big blind’s worth of chips when they clashed four hands later. RovoDice open-shoved with K♥5♥ on the button and lost out when PIUlimeira’s K♣ Q♣ won on kickers after both players made kings and fours on the 7♦ 2♣ 4♠ 4♥ K♦ board. RovoDice called all-in ahead on the next hand with K♥ Q♦ but 2012 SCOOP-High champ kleath’s K♠ 9♣ flopped a pair of nines, eliminating RovoDice in fifth.

Even those three knockouts didn’t really alleviate much pressure – with blinds and antes at 700,000/1,400,000/175,000, the only player who wasn’t in highly dangerous territory was IlDepredator with 60.3 million chips. Then PIUlimeira doubled to 32.9 million five minutes later after calling with A♦ Q♦ in the big blind to beat IlDepredator’s small-blind-shoving K♦ 2♣, mixing things up some more.

Ten minutes later PIUlimeira was on the other side of A♠ Q♦, this time after jamming from the small blind with 3♦ 3♣ after kleath opened the action with the two Broadway cards under the gun. kleath called with 7.1 million chips behind, creating the biggest pot of the tournament so far, and made two pair on the Q♠ A♥ J♦ flop. PIUlimeira missed both the turn and river and left the tournament in fourth.

The table only stayed three-handed for five minutes. kleath’s lead jumped by 27 million chips after a few steals and picking up A♥ K♦ on the button. A raise and a call got that heads-up against Korpieworm’s A♠ 7♥ in the big blind, and Big Slick held up unimproved to take Korpieworm out in third.

Picking up those last two knockout pots gave kleath 101 million chips to IlDepredator’s 35.4 million as heads-up play finally began. IlDepredator lost some ground over the first few hands but then doubled up with K♠ Q♣ against kleath’s A♥ K♣, spiking the Q♦ on the turn. Within 10 minutes of that the two players were tied, and IlDepredator had taken enough small pots to chip up to 100 million by the time the 1:55 a.m. ET break came around.

kleath’s best chance to get back in the swing of things came on the final hand when IlDepredator jammed on the button with Q♥ 3♥. kleath called with A♣ T♠ and 61.4-percent equity, only to watch almost all of it vanish on the 8♠ Q♠ Q♦ flop. The turn and river were no help and kleath bowed out in second.

It was truly a wild table that could have gone anybody’s way. Congratulations to IlDepredator on hanging in there for the win! 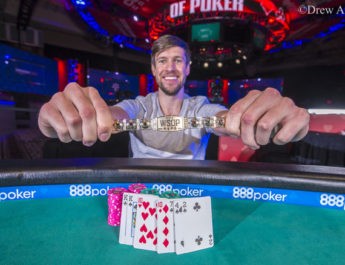