Kenny Hallaert is one of Belgium’s top poker pros, having won more than $4.2 million in live tournaments, along with another $6.5 million online playing under the name ‘SpaceyFCB.’ The 38-year-old recently won his third SCOOP title online, and has four World Series of Poker final table appearances on his resume, along with four deep runs in the main event. In 2016, he finished sixth for nearly $1.5 million.

Hallaert is currently no. 3 on Belgium’s all-time money list, but despite his success, he never gave up his day job. He started his poker journey while working as an electrician, and then later took a marketing job at a local casino. He was tasked with bringing players to the property, and as a result helped to popularize live tournaments in Belgium. Eventually Hallaert took over duties as Tournament Director, and he has since worked EPT events for PokerStars, as well as tournaments for Unibet.

Highlights from this interview working as an electrician, playing card games at the bar with mom, Dutch poker, how a football accident made him a better player, bringing tournaments to Belgium, his unusual path to tournament director, why he never gave up his day job, the mental game, Ivey the end boss, a brutal but important bad beat, burning a house down in Monte Carlo, the silver lining of a sixth-place finish, a lottery ticket in the WSOP, finishing the job he signed up for, bathroom stall gaps, double-cooked fries, factory work, the unbeatable Niklas Astedt, three-betting with industrial techno, and getting away with graffiti.

Catch up on past episodes featuring notables such as Doyle Brunson, Daniel Negreanu, Bryn Kenney, Justin Bonomo, Antonio Esfandiari, Nick Schulman, Barry Greenstein, Michael Mizrachi, Mike Sexton, Jamie Gold, Chris Moneymaker, Maria Ho, and many more. If you like what you hear, be sure to subscribe to get the latest episodes automatically when they are released. 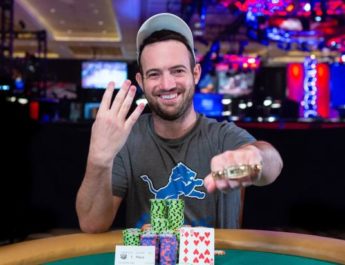 Joe Cada Wins The Closer For Second Bracelet Of Summer