Steffen Sontheimer was crowned champion of the second $50,000 buy-in event to have taken place within the inaugural Poker Masters festival. The player scooped the title and the first-place prize totaling $900,000 after an all-German finale against Fedor Holz.

Sontheimer, just as Holz, is one of the brightest representatives of Germany’s community of poker professionals. Including his victory last night, the player now has more than $4.6 million in live tournament winnings. Here it is also important to note that the greater portion of his earnings has come from high roller tournaments.

Although the $900,000 first-place prize in the Poker Masters Event #2 is one worth all the effort, it was not Sontheimer’s largest-ever poker cash. Earlier this year, the player finished runner-up to his fellow countryman Christian Christner in a $100,000 Aria Super High Roller, winning $1.2 million for his performance.

Sontheimer Road to His Latest Victory

Sontheimer entered the second Poker Masters event fresh from a fourth place in the first one. The player joined a field of 50 entries who generated a prize pool of $2.5 million. The host venue, Aria Resort and Casino, saw two more days of quality poker action as part of the Poker Masters festival.

As cards were thrown in the air for Day 2 action, Kenney, the shortest stack among all seven, was drawing his last breaths in the tournament. The player was eliminated in 7th place not long after action had resumed. His share of the prize pool totaled $125,000. Mateos left next after he could not hold up against Sontheimer. The young Spaniard bagged $150,000 for his efforts. He finished seventh in the Poker Masters #Event 1.

The start-of-the-day chip leader, Christner, was the next to go. His elimination occurred during an epic clash against Holz, which involved a huge pot. Christner collected $175,000 from the event.

Hellmuth, the short stack at the time, left shortly after, good for $200,000. Finally, Marchese’s elimination set the all-German heads-up between Holz and Sontheimer. The US player left in third place for $300,000.

Two-handed action kicked off with Holz holding a massive advantage and a stack of 5.444 million, which he partly built through Christner’s elimination. Sontheimer had 810,000 in chips at the time. However, the eventual champion quickly doubled through his opponent and took the lead. Sontheimer was winning hand after hand, gradually accumulating a larger and larger stack.

On the final hand in play, the two finalists found themselves all in pre-flop. Sontheimer held [Ac][Jd] and Holz turned over [Kc][Jh]. The [7c][8s][7h][4c][3c] ran out on the board to lock the title for Sontheimer. Holz had nothing else left but to settle for the runner-up finish and the $550,000 payout.

About the Poker Masters Festival

The Poker Masters is a unique high roller festival debuted by Poker Central and Aria Resort and Casino earlier this week. Its schedule includes five events – four $50,000 buy-in ones and a single $100,000 one. Two of the lower buy-in tournaments have already been completed with Nick Schulman winning the first and Sontheimer winning the second.

Winning Event #2 and finishing fourth in Event #1, Sontheimer currently sits atop the Purple Jacket leaderboard with overall earnings of over $1.1 million. 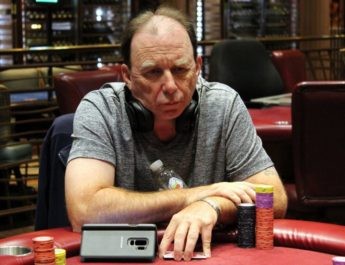 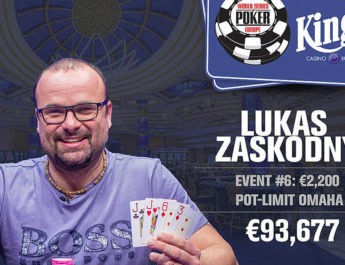